This is a brief report with some photos of Sevankur Motivation camp, held at Aurangabad, on 27-29 May 2011. This was the first Sevankur camp held at Aurangabad. It was organised at “Chatanya Agro Tourism Centre” 25 kms from Aurangabad, near Ellora, a very natural & lovely place. All the logistics had been taken care of by Shri Harish Jakhete & his close friends Shri Sushil Pipada, Manoj Somani & others with their family members. All the arrangements including the finances have been taken care by them. They have done everything with so much of love & affection that everybody felt as if they are at their maternal uncle’s home. Association of Shri Harishbhai & friends is the greatest achievement of this Sevankur camp. They are all successful businessmen & very compassionate & ever ready to support social cause. We enjoyed all the natural living with clean & fresh air, simple food prepared & served with full of love & affection, lot many fresh ripen mangoes, given directly by the mango trees, all the meetings held in the mango trees garden.

In this 3 days residential camp, there were around 50 participants from Aurangabad, Jalna, Beed, Buldana, Akola, Washim, Jalgaon, Pune, Mumbai, Latur, Nanded & Kolhapur districts. This was the first Sevankur camp with such a small no. of participants. Otherwise all the 11 camps held till now had more than 150 participants. Though the no. was small, they are very selective & also from the diverse background. There were three blind friends also amongst them.

All the sessions were very much insightful, as the resource persons are from different background. Each one of them had done a great contribution to the society in their respective fields.

1. Shri Ramchandra Bhogale, Aurangabad – A leading industrialist, who is leading one of the prominent group of industries “NIRLEP”. They are having yearly turnover of around Rs. 350 crores & having around 800 direct employees & around 2000 indirect. He is a very down to earth person, having great vision & multidimensional cheerful personality. He is also involved in various social organisations. He told the stories of how his most of the new industries started out of the obstacles they faced. He had given many tips for leading a successful & enriched life.

2. Dr. Girish & Prajakta Kulkarni, Snehalaya, Ahemadnagar – A wonderful, complimentary, “made only for each other” kind of couple, both are having deep respect & strong bond of faith about each other. The participants get moved by all these & realised the importance of this important aspect of life. Both of them shared the present activities of Snehalaya & what & how the interested Sevankur participants can contribute for social cause. They are closely associated with Sevankur since beginning. Snehalaya is the organisation known for the splendid work for the welfare & rights of Commertial Sex workers, their children, HIV & AIDS sufferors & many other areas in Ahemadnagar district.

3. Shr. Rajesh Thombare, Chalisgaon, Dist. Dhule – 42 years young miracle, who is alive inspite of 32 poisonous snake bites. He is most compassionate & very much friendly about Snakes. “Both the Snakes & Human Beings should remain alive” is his life mission. Though an arts graduate (BA), having experienced a very bad poverty, had been successful in establishing a 20 bedded Intensive Care Unit with 6 Ventilators at a small town like Chalisgaon with people’s participation. This center had treated 25000 cases of snake bites with Zero mortality. He trained thousands of rural & urban people regarding the Snake science, first aid & treatment of snake bites. Many doctors call him for guidance. He is a reference manual of the subject.

4. Dr. Sanjiv Saoji, psychiatrist, Aurangabad – A leading psychiatrist of Aurangabad with strong social attitude & contribution. He has worked for creating awareness regarding the mental health by writing in mass media, public speeches, workshops & training programs etc. He is associated with many social organisations at Aurangabad. He discussed various issues regarding the mind & the mental health & answered the questions raised by the participants. These were quite useful while working for social change.
5. Santosh Garaje, Gevrai, Dist. Beed – A 26 years young IDOL of Sevankur, parent of 35 destitute children of “Sahara Parivar”. He is from a migrant sugar cane labour family. His elder sister died leaving back her small kid of one year, when Santosh was 19 years old. This incidence touched & moved him to undertake his life mission of working for such destitute children. He started with 6 children in 2004 & now running a hostel for 35 children. He is living with them for 24 hours by 365 days. He takes care of all the developmental needs of the children. He has to work very hard for raising the necessary resources for the running expenses of the hostel. He have a dream of having their own building of hostel in future.
Because of the comparatively small group size, we could have deep interaction amongst the participants. We could learn about their challenging life journey. These were the most moving moments of the camp.

Rajesh Jaibhaye (Sindkhed raja, Dist. Buldana) 20 years boy, from a small village, educated upto 8 standard, with wonderful skills of singing, communication etc. He had been to 100 + schools till now & had presented a program to make children aware regarding good habits, national pride etc.

Our immediate next Sevankur camps are proposed on July 27-28-29 at Jalgaon/Dhule & in August (first or second week end) at Beed. 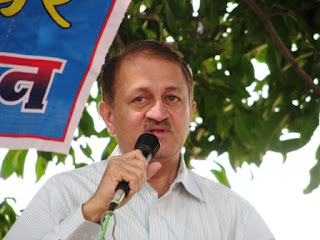 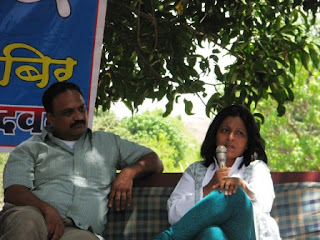 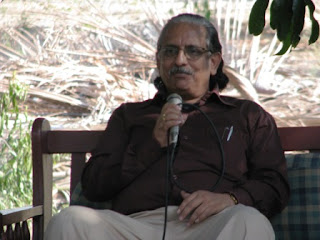 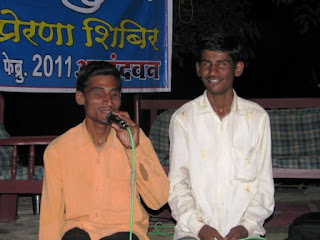 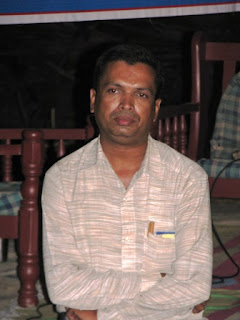 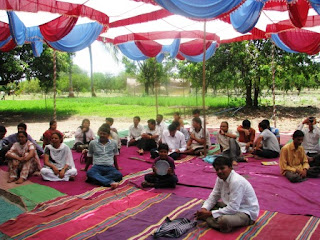 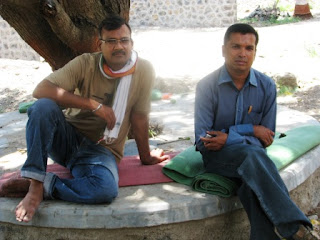 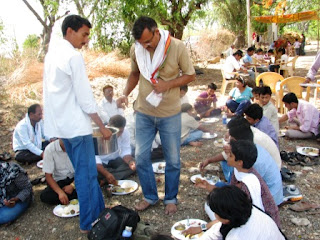 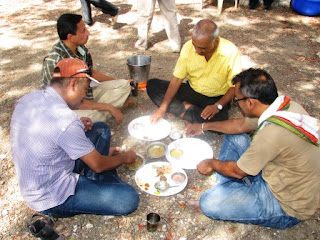 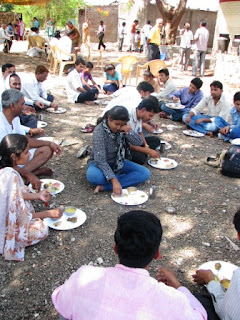 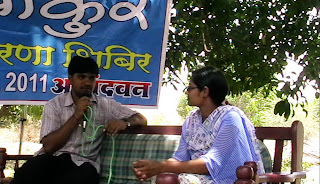