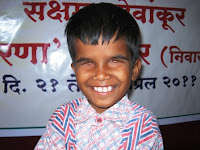 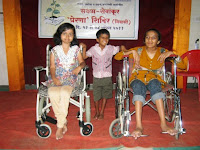 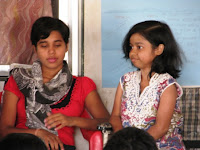 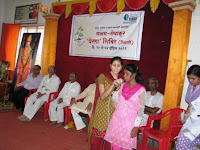 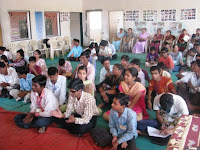 Brief Report
This is a brief report with some photos of Saksham-Sevankur Motivation camp, held at Akola, on 21-24 April 2011. This was the special Sevankur with focus on Differently able youths. This was a very special camp for every participant, resource person & organisers also. Everybody was so moved by the live stories of the differently able Heroes present in the camp as participant.

The camp was organised by the local Akola group of SAKSHAM which is working with visually impaired group since last few years. This group is led by Smt Manjushri Kulkarni, who is a core team member of Sevankur. Many of our Sevankur members are also involved in this activity since last 6 months.

All the arrangements including the finances have been done by the local SAKSHAM group with contributions from many of the individuals of Akola.

There were resource persons who are themselves differently able & still had done something great.

1. Jaysing Chauhan, Nagpur – Physically challenged but a successful industrialist started from 200 Rs. & reached to 5 crore turnover company.
2. Tillu Tiwari, Akola- physically challenged, very good artist, self employed
3. Dinesh Rathi, Akola – lost his sight at the age of 29. But then became a successful businessman fighting all challenges.
4. Sarojtai Tole, Pune – Brail Publisher.
In addition to these external resource persons, this time some of the participants were interviewed, learn about their challenging life journey. These were the most moving sessions of the camp.

2. Paneri Pasad (Amravati) 17 year girls with cerebral palsy, known as JALAPARI (Angel of Water). She secured 19 gold & 6 other medals in national swimming events till now. Even to stand on her feet or to walk few steps on ground is a great activity for her due to her physical disability. To speak few words is also an exercise for her. But she is having a very positive attitude towards life. She had given SSC exam this year & wants to learn more. She spoke few sentences with the participants, which was a very inspiring moments of the 4 days camp.

3. Saleem, 24 years for Kalyan, Mumbai, blind by birth is struggling without any family support. He had grown up & lived few years of his life on railway platform with all kinds of odds & bitterness, but had been able to keep smiling face always. He learned singing on Flute & now is known for that. He could earn his living with the help of his Flute. Now he had been able to get a life companion also.

4. Chetan Uchitkar (Washim) 6 years boy, blind by birth is nothing less than miracle. He is from a very marginal family background of a small village, without any learning facilities till now. But still he can tell 100 + stories on mike with full confidence. His GK is amazing, He knows all the GHOTALAs (scams) going on, many of the political & other happenings, he is very sharp in maths & can perform sums of two-three digits without pen & paper. He was the youngest resource person of the Sevankur camp.

There were many more stories to speak about.

One of the objectives of this special camp was to create more social support for these differently able youths & also to encourage them. But the level of motivation the normal participants got was tremendous. Instead of giving support to differently able youths, we felt that we need to take their support & inspiration to live with smiling faces in our life.

We have decided to integrate the differently able group in all the Sevankur camps henceforth.
Our immediate next Sevankur camps are proposed on May 27-28-29 at Aurangabad & in June (third or fourth week end) at Jalgaon/Dhule.

There are youth camps organised by different organisations. You may participate at suitable places. Some of them are
1. Sevankur at Aurangabad – 27-29 May
2. Sevankur at Jalgaon/ Dhule – 3 rd or 4 th week end
3. At Amalner, Dist Jalgaon – 26-31 may
4. At kolupur, Melghat, Dist. Amravati – 2-8 June 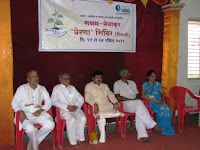 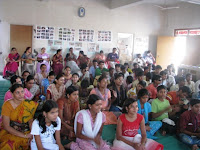